By KEAN and Google

On Friday 19th October 2018, the official launching of the Digital Coding – Girls Coding II program for learning core code principles by KEAN, within the framework of CODE WEEK EU, was announced by the Hellenic Association of the European Parliament.

Girls Coding II is the continuation of the Girls Coding pilot project implemented by KEAN last summer, for 60 students with the institutional support of the EIT-European Institute for Innovation and Technology following the recommendation of the MEP and Chairman of the Innovation Committee, Research and New Technologies by Eva Kaili.

The MEP welcomed the event: “In the European Parliament, it is a common priority and a cornerstone of the Digital Market to promote digital skills, to encourage young people and especially students to become familiar with new technologies. Young people will have to face a completely different working environment and we must try to prepare them. New technologies are a tool, and especially for women, it can become a tool of work, equality, influence. It is very important for women to use the potential of new technologies to continue to participate in the economy, to have their professional independence especially when they choose to make a family. I am thrilled and excited to see the pilot program attended by 60 students last year, this year, with the help of Google, to reach 600 students in Attica, the Peloponnese and Thessaloniki. We are all committed here today, that we will try to make it bigger, to support it in any way, to extend it even more, to include groups that with digital skills will not be threatened by social exclusion, such as refugees and young immigrants.”
In the spirit of preserving the European acquis and all the progressive policies and capabilities that the EU provides for its citizens, the spokesperson of the EP Liaison Office in Greece, Mr. Konstantinos Tsoutsoplides presented the pan-European campaign thistimeiamvoting.eu to encourage participation in European elections. KEAN President Stavros Milionis outlined the dimensions and conditions of the pilot project implemented in the summer for 60 students, with the institutional support of the EIT-European Institute of Innovation and Technology, following Mrs Kaili’s suggestion. “The interest shown by the pupils, the parents’ anxieties, if we continue, the phone calls we have accepted at this time was for us the proof of how important such an initiative was. Fortunately, thanks to Google’s support, this year we have renewed the teaching materials, and we will be able to extend the program to the Municipalities of Ilion, Korydallos, Heraklion, Attica, Piraeus, Messinia, Thessaloniki for 600 children. Today this announcement is the best way to honor the pan-European code week.”

Then, Mr. Nikos Michalopoulos, Head of the Directorate General for Organizational Reforms and eGovernment, Administrative Reconstruction, and the Digital Champion, welcomed the initiative and asked for it to join the wider National Alliance for Digital Skills.  At the closing of the event, Mr. Diego Ciulli, Director of Public Policy, Google, Italy and Greece expressed his opinion.”We are proceeding with planning to create the right infrastructure in the country, which must be a shareholder and keep up with European developments. At a relevant Ministry event, we have more than 100 students invited from all over Greece to present this: the importance of participating and promoting digital skills. ”

Mr Ciulli shared his own story “As in our generation English lessons were the prerequisite for finding work, so for the younger generation, digital skills are necessary. I am particularly pleased with the warm support of this program by both institutions, and by the government, for us on Google it was our duty, it is our duty to give children such opportunities. Decades ago, the real revolution was when Google offered access to information for everyone. Now we offer tools to learn and understand the new digital world. This is the new invitation for teachers. The information, the knowledge that they ask a child is on his cell phone. We must guide this research correctly, and now we need to learn how to make the most of the information.”

The event, coordinated by Ms Madalena Kaili, on behalf of the MADE communication platform, was attended by institutional representatives, researchers and entrepreneurs who were also mentioned in the speech: “In our effort, digital skills are not a privilege for a few, but the right of every student and pupil, today those who are the natural multipliers of this message support us and honor us with their presence and they promote the innovation and the correct use of new technologies, more specifically we are mentioning Mrs. Eleni Atsikbassi from Healing Lesvos Project with the tech hub with which we will cooperate both for the pupils and citizens of Lesvos as well as for the newly arrived refugees, Mrs. Mellivani Mahout, a young actor living between Greece and Canada because she gives voice to the character of the ancient Greek goddess in one of the world’s most famous video games, Mr. Yiannis Kliyafas from the Athens Technology Center, who will electronically support the holding of the European elections, Mrs. Maria Makridaki, General Director of ESIMET, Mr. Manolis Koutoulakis on behalf of the University of Piraeus, Mr. Gerasimos Angeletakis responsible for the education of the Municipality of Piraeus and Mr. Dimitrios Plourakis from the Secretariat of Hellenes Abroad, and of course the Google team in Greece “. 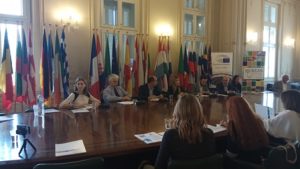 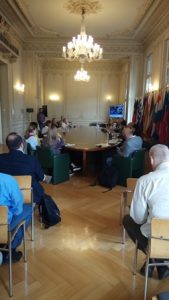