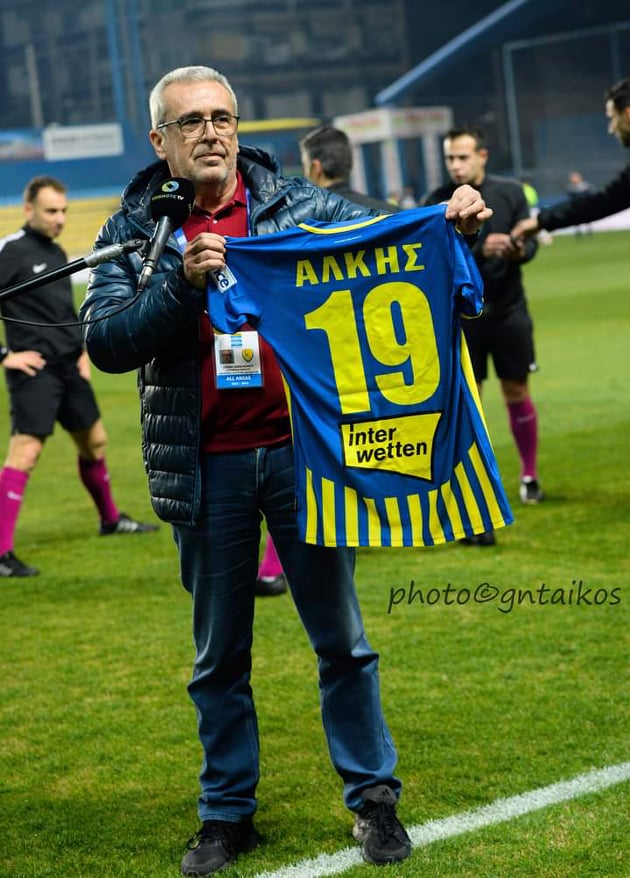 “Sharing emotions is what unites football fans. There should be no place on the field for the one who is committing violent acts.”  Interview with Christos Stoumpos, communication manager of Panetolikos FC.

As part of the European project RIGHTS which is funded by the ERASMUS Sports program of the European Union, we spoke with the communication manager of Panetolikos, Mr. Christos Stoumbos, whom we would like to thank.

The football team Panetolikos, known not only for its athletic performance but also for its social work, has recently taken a stand with campaigns on “current” issues that unfortunately concerned the Greek society such as femicide and the murder of Alkis, a fifteen-year-old boy due to fan violence.

In your opinion and experience, why do people discriminate in general?

For many reasons they are driven to hate rhetoric, it is the very nature of man to want to prevail over others and will find the weak points of the “opponent” so as to dominate (in any field) this happens. There are differences based on the view of inferior and superior origin-race-ideology and we want to impose this view in order to gain benefits.

Do you think there are mental and psychological processes behind this discriminatory behavior?

Obviously, but I think it is a complex issue that only experts can answer.

Do you think there are certain groups that are more likely to be victims of discrimination?

Yes, I think that there are also ethnic groups and racial discrimination, such as in our country the Roma.

This has to do with the spiritual and mental level of each person. There are too many people who know that they are crossing the line and continuing. I don’t think they don’t understand what they are doing, aiming at certain things. Many times, it is pointed out to some people that they have gone over the edge and continue to do so.

Do you think that hate speech and discrimination can be prevented?

Yes, it can be done. It is a matter that takes both time and a lot of effort and it has to start with the education of young people and children, from school and the family, cultivating empathy. It will take a lot of time to educate children to reach a satisfactory level after years.

If we increase the visibility of these issues, would it help our society to be more just?

Obviously, I think that raising awareness comes with highlighting the problems by focusing on them, without embellishing them or changing the picture and meaning of events. We need to put a “finger on the tongue” to see the size of the footprints as well.

Do people in the context of sport often come up against hate rhetoric?

Sport, especially professional sport, and I will focus on football, the area in which I operate, lends itself to those who are willing to discriminate and put up barriers. Two teams are formed, a dispute is set up and very intense, and we set up the “fortifications” and start the “war”. Sport gives many reasons for conflict because it has wins and losses, so there is a free field for such attitudes to develop.

Do you think amateur sport plays an important role in educating and raising awareness about these issues? What role can it play?

They can play an important role and that’s because in professional sport there are powerful interests, mainly financial, that make us forget the principles and values we have as people around a club. But amateur sport is something else, and I think it can educate young athletes who will become professionals on the principles of “fair play” so that they can follow the same attitudes in their professional sporting careers.

What kind of values should sports associations impart?

A sporting community is a miniature society where all the representatives of society exist. At a higher level of the championship, there is a babel of cultures, and religions, it is a multicultural area and these differences become an excuse for those who want to “provoke” those who watch in a fan capacity various tensions.

What are the main objectives of a campaign to combat discrimination?

Sports clubs have years of experience and a long history that they can build on and promote what they have achieved. Panetolikos, which I represent, has been doing a lot of parallel actions since its foundation back in 1926 and is the only athletic club in the country. It was founded by people who were involved in education in Agrinio. It enabled children from needy families to learn things in the afternoons. Today, it enables the whole family to come to the stadium away from violence and

from violence and abusive language.

What messages can be used to spread anti-discrimination?

A football club attracts people of different ages and the aim is to have them follow it, to move them through its action. Sharing emotions is what unites fans. There are many messages, but the most important thing is action and there is no place on the pitch for those who want to commit violent acts.

What have been the main steps from the very successful awareness campaigns you have run?

We feel very happy to be able to express our position on the murder of Alkis with the help of an important cartoonist. The sketch shows Titormo a modest giant of Aetolia holding Alkis in his arms. All of our athletes decided and put Alkis’ name on their shirts to remind us all that we could have been in this child’s shoes. After all of this, we sat down and discussed how unfair it is to mourn victims in a place where we should only share joy. No to hate speech and acts of hate!

Which channels do you use to run an awareness campaign?

We use every possible means. We conduct visits to all the schools in the area with our football players who are the protagonists, conveying to the children how they feel about the abusive messages and what they would like to see in a calm atmosphere on the pitches. We invite all schools to the stadium by carrying out actions passing the message against xenophobia and violence. There is a constant effort on the part of the team to make the children, the future fans better.

What criteria do you use to evaluate the success of a campaign?

The essential thing is acceptance and participation. We are interested that some initiatives are known and accepted by the people.

How willing are the players to participate in such actions?

We have never encountered a refusal from our people to participate. The participation of all members of the organization is important and decisive as we co-create the actions with them.

Do you think it would be helpful to have a guide aimed at sports clubs?

We do what our heart tells us to do and it would be important to have the guidance of experts by forming an axis on which to move and this would help the initiatives we have taken from time to time.

Did you have any amount for these campaigns in the budget of the organization?

The need itself creates the financial amount and it is not what will put a brake on any idea to be implemented. You can do things without particular money.

Thank you very much for all these interesting topics you shared with us. Would you like to add one last thing?

Recent events force us to express our opposition to violence.

Contradictions in society and especially in football incite violent behavior. As parents, we must teach our children to lose and accept defeat and not only to seek to win in their lives or in the sports they play.