The second transnational meeting of the ENHAGA project took place on the 26th of February 2021 via Skype, due to the ongoing restrictions resulting from the COVID-19 outbreak. The partners had the opportunity to discuss the progress of the project so far and the next steps, focusing especially on the design and development of the main projects output, the ENHAGA e-book and the ENHAGA game.

ENHAGA’s meeting agenda
Approaching the end of the first year of the implementation of the project, which started on April 2020, the meeting offered the partners the opportunity to take stoke on the progress of the project which, despite the difficulties and unprecedented circumstances due to the COVID-19 pandemic, has managed to reach its objectives so far. This document was produced with the financial support of the European Union. Its contents are the sole responsibility of the author and do not necessarily reflect the views of the European Union. The European Commission does not accept any responsibility for use that may be made of the information it contains. 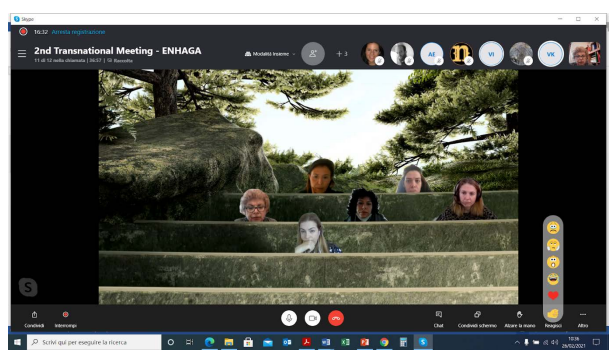 The agenda of the meeting focused on two of the main outputs of the project:
• the upcoming publication of the ENHAGA e-book and
• the design and development of the ENHAGA game.
The forthcoming ENHAGA e-book will consolidate the findings of the national research performed in the partner countries aiming to investigate the current status, challenges and gaps in combating cyber sexual harassment, particularly towards female gamers.
The e-book will also seek to offer recommendations for the design of the ENHAGA game and a series of associated tools to empower young girls to react to cases of cyber sexual harassment and further report incidents. Visit our website and follow us on Facebook and on Twitter to learn more and stay informed on the next steps of the project.