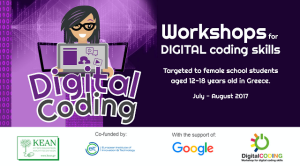 The non-profit organization KEAN (Cell of Alternative Youth Activities) in cooperation with the ΕΙΤ-European Institute of Innovation & Technology successfully carried out a series of Code – Learning (programming) Workshops for children with emphasis on girls aged 12-17 years old in the Regions of Attica and Peloponnese during July and August 2017, under the framework of the European Programme Horizon 2020 and the wider European Union Digital Single Market Strategy for countries where there is a greater need to enhance digital skills.

More than 50 students (schoolgirls), who promptly applied to their municipalities, had the opportunity to get to know the basic principles of…..decoding the Digital Code through the guidance of the educators of KEAN.

The results of the Pilot Programme will be presented during the event, in the presence of the Entrepreneurship Officer of EIT, Mr Laurent Roux, of MEP (Member of the European Parliament) and Chair of the European Parliament’s Science and Technology Options Assessment body (STOA), Mrs Eva Kaili, and the Mayors who hosted the Programme, Mr Nikos Mpampalos – Mayor of the Municipality of Iraklio of Attica, Mr Ioannis Gripiotis – Mayor of Evrotas Municipality, Mr Grigoris Gourdomixalis – Deputy Mayor of Education and Lifelong Learning of Korydallos Municipality. Moreover, The Secretary General of Digital Policy Mr Stelios Rallis will also address greetings.

The goal is the campaign, which was launched with the support of Google, BCA College and Athens Tech College, to continue throughout Greece and expand to other neighbouring European countries.

18.50 Presentation of the Results of the Pilot Project “Coding Girls”

19.15 Speech by Google Executive: “Skills of the Digital Era” & 10’ Question Contest to groups of pupils